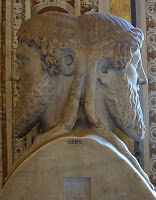 January is named for the two-faced Roman god Janus, who looks into the future with one face and into the past with the other. That’s kind of where I’m at, too. On these dark days following the winter solstice, I look at the year ahead and resolve to be better in some small way, even as I look at the year past and realize how unlikely that is.
Was it just 12 months ago I was standing in front of this same mirror, vowing to hit the gym five days a week, cut down on the fatty foods and take it easy on the wine? I think it was. Those vows are too easy to make after the excesses of the holiday season. Suddenly the waistband is a little too snug and you’ve got some acid reflux going on, and a little headache just behind the eyes, and you realize that in a whole year all you’ve achieved is another trip around the sun with everybody else. It really is time to make a change, you think, and this time the change will extend beyond the first week of February.
Which is no doubt why the Romans invented old Janus, god of gates and portals, god of transitions. In 21st-century America, the transition most sought is the one from fat to slender, or from obscurity to fame, but the idea is the same: If you want to be good-looking and get your own reality show, once a year it’s a good idea to take a few minutes and see how things are trending.
Thus are born New Year’s resolutions — the temporary triumph of hope over experience. I make fewer of them than I used to, but I still do. They’re mostly mundane: gonna get fit, gonna get better on the guitar, gonna be nicer to everybody. I don’t write them down anymore, since it’s better not to leave a paper trail, but I still try to convince myself each January that this time it will be different, that I will end the year a better man than when I started.

We’ll see about that, won’t we? For now, let’s drink to the end of an odd year — and the end of a decade that seemed not so great, even by my lowered expectations. Things can only get better, right? Happy New Year, all.