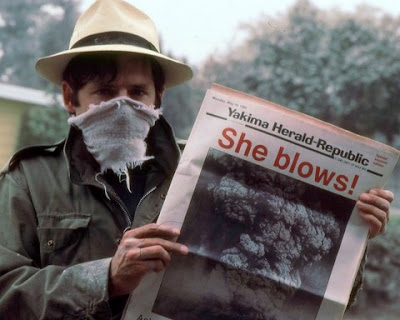 I started this blog with a narrow focus on crime fiction, but it’s been all downhill since. I’ve since veered into inane mini-reviews of TV and movies, descended into celebrity mockery, then went down a couple more pegs with trite remarks about the weather. Roughly a third of my posts now are about how pointless it is to do a blog at all. Today, it has come to this: I’m down to personal recollections.

Because today is May 18. Anybody who lived in the Northwest corner of the nation in 1980 remembers that day pretty well. We were living in Yakima, Wash., where I worked for the daily newspaper. It was Sunday morning and we woke to the sound of an approaching thunderstorm. I went outside with the kids, and there to the west was a wall of gray, laced with lighting. A storm, yes, but there wouldn’t be any rain that day. The radio informed us that Mount St. Helens had just exploded, and the ash cloud was headed our way.

I didn’t know much about volcanoes, but I knew one had annihilated Pompeii. I hustled the kids inside and put our Honda Civic in the garage. I ran some drinking water. Then we huddled inside and watched in awe as night fell at about 9 in the morning. It felt like judgment day.

Naturally, the paper called shortly after to summon me to work. That was always the way with the newspaper career: When anything big happened, the last place you could be was with your family. It was an eerie drive to work, midnight at noon, the streets choked with ash, the few people outside wearing bandanas over their faces, wielding shovels or brooms to no great effect. I remember well my bleak realization that this stuff would never melt.

It was probably the longest newspaper shift I ever worked, right up there with the 2000 presidential election and 9/11. We came up with a paper we were proud of, which I hoisted for the camera the next morning during a break in shoveling ash. The Herald-Republic later put the page on souvenir coffee mugs, but the red headline quickly faded in the dishwasher. Now it just shows a tiny picture of the huge cloud that was inbound that morning. The page is gone too, lost in one move or another — but newsprint is meant to last for days, not decades.

Anyway, who needs a souvenir for something like that? Seen in the rearview mirror, what is life but a collection of the days you remember without them? Come back in November and you’ll learn what I was doing the day JFK got shot.