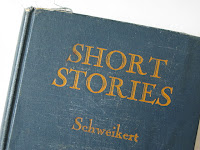 Whenever I visit my folks’ place in Montana, I can never head back home without a sack lunch and a hundred pounds of books. Mom’s always got a lot more food around than the two of them can eat — some of it a few weeks past the sell-by date — and a lot more books than her groaning shelves can safely hold.

Putting away the lunch was the easy part. Now I’m wondering what to do with these dusty books. My own shelves are long since full, mostly paperbacks that I’d be embarrassed about should President Obama wander through. The stuff Mom sent home with me defies easy categorization: Best Tales of the Yukon, a collection of Robert Service poems; The Walls of Jericho, by Paul E. Wellman (Mom thought I’d like it because it’s set in Kansas); The Waverley Novels, by Sir Walter Scott. And a whole raft of other ancient tomes by authors unknown to me.

Whether I’ll ever get around to reading them, I can’t say. But it’s been interesting to look them over. Most were part of a library collection at some point; the first volume of The Waverley Novels was first checked out from the Butte library in January 1927. Now, 82 years hence, it’s come down to me. I think of all people who’ve read it since then, all the hands that have held it, all the brows furrowed in incomprehension at Scott’s lengthier paragraphs. I look at my own bookshelves, see a slim modern novel like Calibre by Ken Bruen, and ponder the evolution of the story and the printed word.

I suppose the book I find most interesting here is the one entitled simply Short Stories. It was printed in 1934, apparently as a high school text. A number of classic tales are included: “The Speckled Band,” “The Monkey’s Paw,” “The Fall of the House of Usher.” But there are also quite a few titles and authors now faded to obscurity. The lead story, “The Token,” is by one Joseph Hergesheimer. Never heard of him — my apologies to those who have. When the collection was published in 1934, he was apparently at the height of his powers — known, as the introduction states, “primarily as a novelist.”

What I find endearing about this book is the premise that students might actually want to write something themselves. And so there are words of advice and encouragement. While warning the student against reliance on technical elements in writing, the book goes on to spell out the 24 types of short story:

Also, lest students think writing is an occupation for academics and elitists, the introduction goes on to note that “Contributions to our American literature have been made by Negroes, lumberjacks, cowboys, sailors and others.” That’s good to know.