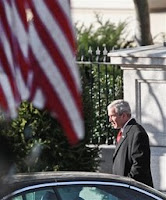 This reality show has been plummeting in the ratings for about six years, so the finale might not do so well either. President Bush gets on TV tonight (7 p.m. Central) to bid farewell to a grateful nation.

Except the nation is not all that grateful. Yes, terrorists haven’t knocked down any skyscrapers since 9/11, but they might as well have: The financial geniuses who worked in those skyscrapers have mostly decamped for the high weeds, taking with them the unearned wealth we’d all hoped to coast on during our golden years. So many of their offices are empty now, it’s like a neutron bomb went off on Wall Street. Thanks, Mr. Bush, for keeping the country safe. Turns out the biggest threat to national security was thieves in expensive suits. They didn’t even have the decency to send crappy audiotapes warning of their intentions.

I was never a Bush hater. I always thought he was a decent man who had trouble putting sentences together. I was somewhat late in realizing that he’s really not very smart, not very interested in being smart, and far more malleable in the hands of scheming advisers than he will ever admit. When you’re president, being decent is nice, but it’s not quite enough.

Speaking of the Onion and President Bush, this is one of the best things they’ve done: