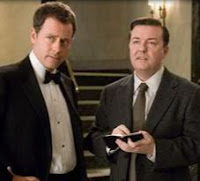 Turning now to the cinema, here’s a plug for Ghost Town, the finest comedy of 2008. Too bad nobody bothered to see it during its brief run in theaters.

The wife and I watched it last night, courtesy of Netflix and my great big 52-inch television. Ricky Gervais is not precisely the same character he played in the original The Office and Extras, but his role as a dentist named Bertram Pincus isn’t quite a departure, either: a veneer of British civility stretched way too thin over a fundamentally misanthropic personality.

After a colonoscopy complication leaves him clinically dead for seven minutes, Dr. Pincus finds himself beset by a variety of spirits who want him to help complete their unfinished business in the physical world. Complications ensue. It’s Sixth Sense with a sense of humor — and surprisingly, a bit of genuine poignance at the end.

Ghost Town was hawked heavily in trailers and TV spots before its release; usually this means you see the funniest parts so often that the movie itself feels like a rerun. Here, the ads don’t do the film justice. The biggest laughs come not from the sight gags but the deft dialogue. SNL’s Kristin Wiig has a slight role as a clueless doctor, but she delivers some of the film’s biggest laughs.