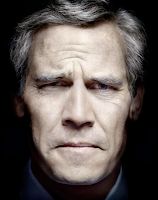 We went to see W. last night. It was entertaining if not illuminating, and for anybody who still sees the need to defend George W. Bush, it was about as fair as you’re going to get from Oliver Stone. If I were Roger Ebert, I’d give it about two-and-half stars.

I say entertaining because the various gaffes perpetrated by the Bush administration over the last eight years do add up to absurdist comedy when assembled by a competent director. The movie plays like a succession of Saturday Night Live parodies, some funnier than others. The central joke is not that Bush is a fool; it’s that we elected a fool. Twice — the second time long after the depth of his foolishness became manifest.

I say the film is not illuminating because all of this stuff is well known, thanks to a succession of Bob Woodward books and Bush’s own press conferences and speeches. Oliver Stone isn’t adding anything to the body of knowledge, just stirring in some imagined conversations between Bush and his parents, and a succession of dream sequences featuring the current president lifting his arms to wild applause in an empty baseball stadium.

Nobody ever accused Stone of being too subtle. He applies symbolism with a trowel. In one scene, Bush and his advisers are walking on his Texas ranch, discussing when to start the Iraq war, when the president realizes they’ve wandered off the road. Hmm. What could that mean?

Finally, it’s risky business to make a movie about people who are not only still alive, but in some cases still in the administration. If a portrayal doesn’t ring true, it becomes obvious. Condoleezza Rice might want to consider a lawsuit when she sees how Thandie Newton played her: a muttering lapdog whose every movement telegraphs submission. This is not the Condoleezza Rice we’ve seen on TV, and it undercuts the authenticity of the film. That said, Richard Dreyfuss has managed to make Dick Cheney even more smug and sinister than we’ve all imagined. And we’ve imagined quite a bit.

I don’t think W. will have any impact on the election, and I can’t believe that’s what Stone intended. Those who support the president won’t see it; those who loathe him were never going to vote Republican anyway. I’d say it’s worth a look; just check your politics at the door and don’t expect to learn something you didn’t already know.