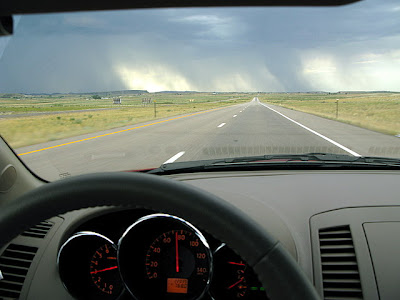 Today I drove through Kansas and Colorado and much of Wyoming. Nothing like a road trip, even with gas north of $4 and the knowledge that each dollar I spend is not being replenished by a regular paycheck. Hey, this is why we save our money in the good times: so that in the bad times we can still brave through a thunderstorm outside Douglas, Wyo., sheets of hail horizontal across the pavement and visibility limited to the erratic taillights on that 18-wheeler just ahead.

Brief weather tantrums like that can kill you if you’re driving I-95 from Philly to New York, or I-76 from Philly to Harrisburg. Back East, there are just too many drivers on the road, and they all become aware of peril at precisely the same moment, so that even minor problems reach critical mass in nanoseconds. One minute you’re shouting your exact location into your iPhone and the next you’re skidding sideways into a dozen jerks in Volvo SUVs who braked abruptly to ogle somebody changing a flat.

Western weather can be cruel, but the roads are forgiving. There’s a car about half a mile ahead and another about the same distance behind; you could drive with your bare ass out the window and it wouldn’t distract anybody. Even getting in that position wouldn’t pose much of a problem — you’ve got both lanes, baby, and nobody’s worried if you swerve a bit.

I elected to keep my ass in the seat, and was able to log 800 miles for the day without undue discomfort. It’s about the same as driving 150 miles on the I-95 corridor. Now I’m ensconced in the last available room between Cheyenne and Sheridan, here in beautiful Casper. FYI: if you come to Wyoming in July, you might want to look into when Cheyenne Frontier Days is scheduled. It’s the reason it took four stops tonight to find a vacant room. Evidently it’s popular enough to fill up rooms in a 150-mile radius.