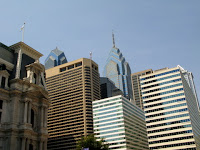 Happy Independence weekend from Philadelphia, the cradle of liberty, the City of Brotherly Love, the City That Loves You Back, and shoves you back if you walk around with a chip on your shoulder. I’m at the Latham Hotel, at 17th and Walnut, a short walk from the place where a bunch of guys got together 232 years ago and hammered out the foundation of the nation we enjoy today. Tomorrow the city will mark that day with the solemn rites the founders doubtless intended: a raucous parade, and many thousands of dollars worth of fireworks, and quite a few drunken fat guys running around shirtless.

Center City hasn’t changed much in the last two and a half years. The traffic is as dense as ever, the sidewalks are still crowded with slim hipsters in black and denim, conversing on cell phones with identical people a few blocks away. With the exception of one new skyscraper, the skyline remains quite familiar. It’s not like Montana, where every time you go back there are new mansions crowning old hillsides, to the detriment of one’s view and one’s memories. It’s not like Kansas, where the center of every city has withered away and one Wal-Mart looks much like another. The charm of an old city like this one is its past and permanence, and the shadows cast by its massive structures. You get used to the fetid aromas rising from the subway vents.

Still, it can feel odd walking around a place you used to live, seeing it as a tourist rather than resident. You’re not quite so footsure at crosswalks, you feel slightly rubish to be carrying a camera. You realize that your clothes do not project sophistication. Sitting in a bar, you are reminded that drinks here cost about twice as much as they do in Wichita. And so does everything else. It has a way of moderating your consumption.

Tonight we dine with friends, taking the train out to leafy Chestnut Hill where we used to lived. Tomorrow, a long walk in the Wissahickon, where the wife and I logged many miles preparing for the annual Broad Street runs. This isn’t really a sentimental journey — we haven’t been gone that long — but it’s interesting seeing our old haunts with new eyes.