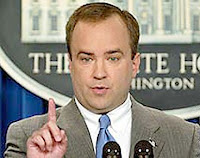 I don’t give a damn about Scott McClellan’s memoir, wherein the former White House press secretary makes the shocking revelation that Bush isn’t such a great president. Thanks for the news flash, Scott. This is something we’d never have guessed, since things have gone so well over the past eight years.

I understand why disgruntled employees write books like this, but I can’t understand why anyone buys them. Twenty-some bucks seems a little steep for a too-thick tome that confines itself to the obvious. Also, this is a book about liars written by a guy who earned his living telling them for three solid years. When Scott McClellan writes that the president “convinces himself to believe what suits his needs at the moment,” it sounds like a pretty apt description of Scott McClellan.

Not to preach, but the time to act on moral qualms is when it matters, not when the ink is dry on the book contract. I’m reminded of Robert McNamara’s confessional In Retrospect: Yeah, we all knew Vietnam was a mistake, but what’s a defense secretary to do?

Here’s what you do: You keep your trap shut and make a lot of money further down the road. You get on the talk shows again before everybody forgets your name. And you trust the credulous to pay again for information they already learned the hard way.