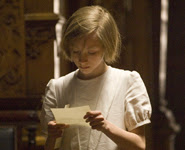 Ian McEwan’s Atonement remains one of my favorite novels, so it was just a matter of time before I got around to seeing the movie. Mostly, I was curious to see how a director and his screenwriters could make sense of a such a nuanced work, one that relies so heavily on interior dialog. I’m impressed. Although I’ve not yet talked with anyone who saw the movie without first reading the book, the film deserves the praise it’s getting, and I’ll be recommending a few key Oscars — just as soon as my Academy credentials come through.

Best supporting actress won’t be among them, though. Saoirse Ronan is fine as the young Briony Tallis, but the character is later played by two other women, neither of whom particularly resemble her in appearance, mannerism or emotional demeanor. Should this matter? To me it does. Sorry, Saoirse (I hope I’m pronouncing that right), but you’ve got a long career ahead of you.

In many ways, Atonement is an old-school film, much as the book was an old-school novel: an elegantly-told tale of star-crossed passions that are no match for the tidal forces of history. I was reminded of Dr. Zhivago. There is one thoroughly modern touch: the much-discussed continuous shot, more than five minutes long, depicting the chaos among routed soldiers trapped on the shores of Dunkirk. It’s an amazing sequence — so amazing that it might actually undercut the film by making the viewer aware of the difficulty of shooting it. Or so goes the argument. My conclusion: It puts you in the movie more than it takes you out.

I still have to see Juno and There Will Be Blood to round out the list of best-picture nominees. Thus far, I’d rank Atonement as the best of the nominees I’ve seen, followed closely by Michael Clayton and, much further back, No Country For Old Men. (I have a foolish bet with the wife that No Country will not win — I see it as far too bleak and unsatisfying as a story to sway Academy voters; she notes the awards it’s garnered already and detects a whiff of inevitability. We shall see. For the record, she hated it.)