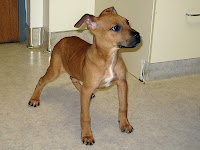 We’re thinking about getting a dog. Her name is Faith (pictured at left). Taking on a new pet is always a gamble, but I figure that even if she is a terrible dog, and craps on the carpet, barks all night, kills the cats and chews up my cowboy boots, I can at least write a bestselling book about it to defray some of the expense. Hey, everybody else does.

Look at John Grogan. A few short years ago he was toiling in obscurity as a third-tier columnist for my old newspaper, the Philadelphia Inquirer. Now he has become the Thomas Kinkade of dog writers. The man is everywhere: Marley and Me; Bad Dogs Have More Fun; Marley: A Dog Like No Other; Bad Dog, Marley; The Marley Code; Marley and the Deathly Hallows; That Darn Marley!; and, due out next spring, The Marley Secret: Spinning Dog Feces Into Gold.

Strolling through Border’s the other day, I noticed that Grogan’s success has not been lost on other authors. Anna Quindlen has weighed in with Good Dog. Stay. Dean Koontz has Life is Good. Ted Kerasote is raking it in with Merle’s Door: Lessons From a Freethinking Dog. And I couldn’t help wondering: What the hell was I thinking when I agreed to assume custody of two worthless cats?

I’m looking at them now. Their names are Nick and Nora, but they share none of the traits of the detective duo. One has commandeered my favorite recliner for another 12-hour nap; the other is curled in the corner, having deduced early on that if he uses the litter box, that’s pretty much the extent of his responsibilities. I like cats, but they’re not proving to be a rich lode of inspiration. After the chapters on them destroying the sofa and licking their butts, what else is there? Where are the life’s lessons? Where is the heartwarming devotion, the amusing antics? These cats are clean and good eaters, but that’s about all they are.

Which brings me to the dog. Our vet found her a few weeks ago, starving in an abandoned home, and when we went to check her out yesterday, she eyed us warily for portents of further misfortune. She didn’t bark or leap for my jugular, which I took as a good sign, but she didn’t look as though she were ready to start imparting insights, either.

I don’t know. Having a dog is a big responsibility. If I’m going to bend over backward for this mutt, there’d better be a payday at the end of it. John Grogan would expect no less.