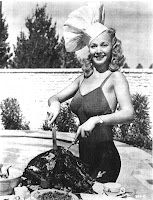 My staff here at the warehouse has departed early for the Thanksgiving weekend, disregarding my explicit instructions to make sure the Big Box O’ Blog Ideas was full before leaving. Also, someone appears to have raided the petty cash drawer. It’s so hard to get reliable help these days.

Anyway, once again I’m going to have to pull something out of my … well, let’s just say I’ll have to make something up. Since I’ve read no books, seen no movies and watched no television in the past couple of days, this is harder than it looks. Hmmm. Perhaps something with a Thanksgiving theme?

So when’s the last time you read a mystery where Thanksgiving, the holiday, was a prominent element in the story? I can name a dozen Christmas-themed crime novels just off the top of my head, and probably as many set around Halloween. Several for the Fourth of July, even one or two for Valentine’s Day. But Thanksgiving doesn’t seem a great inspiration for mystery writers. It’s a mostly benign holiday, involving only one of the seven deadly sins. And to me, gluttony is not particularly conducive to dark deeds. Maybe it’s all that triptophan.

Still, Google exists to remind me that I know far less than I think I do. A search turned up dozens of crime novels apparently having something to do with Thanksgiving, including at least one author I’ve heard of: Michael Dibdin, whose Thanksgiving is billed as “a moving portrait of the profound effects of love when all that seems to remain is loss and grief.” Um, OK. Whether it has anything to do with the American holiday, I don’t know. Any other memorable titles worthy of mention?