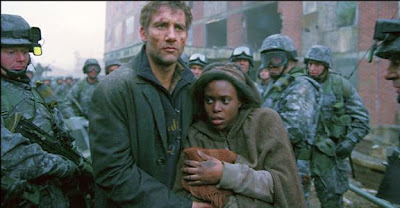 I haven’t yet read P.D. James’ 1992 novel The Children of Men, and after seeing the movie a second time, I’m not sure I want to. This is a departure for me, but the movie’s such a cinematic tour de force I can’t see how the book would not pale in comparison. It may be one of the rare cases (Blade Runner is another) where the screen adaptation outperforms the source material by a large margin.

I saw Children of Men on the big screen just after Christmas last year. At the time, I was blown away by three long single-shot sequences that appeared almost impossibly complex to choreograph. I’ve since discovered that a bit of editing was involved in each, but those scenes delivered such a visceral punch that I was determined to see them again. So thanks to my friends at Netflix, I watched the movie a second time last night, this time on the small screen.

Bottom line: This is still the best film of 2006, and I’m still incredulous that it earned no Oscars (it was nominated for three, including best adapted screenplay). Even on my aging 27-inch Akai, the brisk pacing and taut documentary style seem undiminished. Because it’s set in 2027, it’s fair to call this science-fiction, but it’s more than that — it’s also a political thriller and a road movie with a social consciousness. Its vision of a fortress state where horrific deeds are committed in the name of “homeland security” remains all too resonant. I liked The Departed too (which did win best picture), but Children of Men is a much more significant work.

I know the film is based only loosely on P.D. James’ book, but here’s a question for those who have experienced both: Which is the better story? And why?