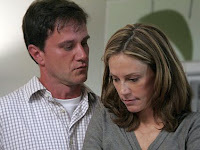 HBO has the best show on TV with The Wire, so it’s probably fair to point out that it also has the worst: the bleak and tedious Tell Me You Love Me.

Because of the buzz about the explicit sex scenes, I caught portions of this overly-earnest angstfest during its first season. But I had never forced myself to sit through a full episode — a precaution I unwisely cast aside for the season finale. It’s an hour of my life I will never get back. The show is not only as bad as my initial impression — it’s far worse.

How do I hate this show? Let me count the ways:

The casting: All white couples, all pretty much the same age, all with the same acting coach. Two of these women and two of the men are indistinguishable from each other. The men all remind you of Darren on Bewitched, except they never smile. The women, I think, must be sisters. One is tortured by the lack of sex and one is tortured by not being able to have a baby. All three are tortured by general dissatisfaction, and we all know what a rich lode of drama that is: “Why are you so unhappy?” “I don’t know; I just am.” Speaking of which …

The writing: Remember the last time you got in a fight with your spouse or girlfriend and it just kind of went on through the evening and into the next day? That’s what the dialog is like: “This is not about you or me; it’s about us.” That sort of crap. It just never ends. Then all the couples go to the wise therapist, a suburban Yoda played by Jane Alexander, who changes the pronouns around and feeds the same dopey dialog right back to them. If I was paying $200 an hour for that kind of insight, I’d rather drop the dough at that tribal casino down in Oklahoma.

The sex: This was the reason I had even mild curiosity about this show, all the buzz about its unflinching portrayal of makin’ whoopie. Yeah, right. I’ve never felt so … so violated. Yes, the scenes are graphic enough, but you feel like you’re watching a National Geographic special about really depressed lemurs. I guess that’s the point, to demystify this whole business of intercourse between married couples, but did they have to make it so wince-inducing? What Deadwood did for profanity, Tell Me You Love Me is doing for sex: desensitizing the audience and completely taking the fun out of it.

The geezers: If I see wise, gentle Jane Alexander mount her wise, gentle husband one more time, that’s it. I’m out of here. Yes, seniors can have active sex lives; we get it. But it’s one of those things that we don’t particularly care to watch, even in soft focus and very muted lighting.

The humor: What I mean by that is, the total lack of it. If anybody cracks a smile on this show, it’s the sad, doomed smile of someone who finally realizes the futility of all human endeavor. So earnest is this series, so convinced of its importance, that the writers must go through each script three or four times to make sure there’s nothing funny in there. I mean, we don’t need The Bob Newhart Show here, but life with even these miserable people cannot be without a laugh or two.