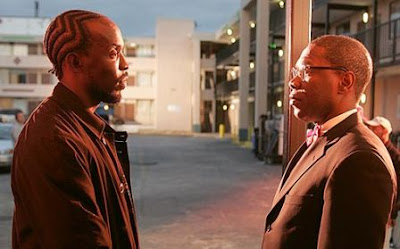 It’s taken about four months, but thanks to my good friends at Netflix I’m finally through the first three seasons of The Wire. A pair of clueless cats roused me about four this morning, and since I couldn’t get back to sleep I watched the last two episodes on my laptop.

I’m now willing to concede that my son and mother-in-law are right: This show really is better than The Sopranos, that other HBO series I’ve wasted too many hours on. While not perfect, I’ve come to admire the writing and plotting above all else. David Chase knew how to craft memorable characters and conflicts; The Wire‘s David Simon and company know how tell stories, and — more importantly — how to conclude them. Each season of The Wire unfolds like a 12-part novel, with a genuine beginning, middle and end. Story arcs never really seemed to matter with The Sopranos — a point that became maddeningly clear in the finale, when Chase simply jerked out the plug and mocked those who expected better. 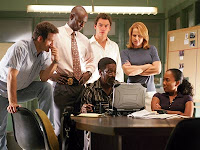 I suppose that’s what happens when the audience gives you too much love: you begin to have contempt for them. That hasn’t been a problem with The Wire, which has struggled in the ratings despite great critical success. This is a show where the individual episodes seldom work as well as the individual Sopranos episodes, but viewed as a season they are far more satisfying.

Maybe one reason for that is that the characters — cops and criminals both — actually seem to grow and change as the story progresses. It’s easy to take the show’s moral ambiguity for cynicism, but there’s nothing cynical in the way each character is also imbued with motives more complex, and sometimes more noble, than simply selling dope, or catching bad guys, or acquiring power. For those who have seen the show, my favorite character, Omar Little, is a good example.

Viewed in retrospect, each character in The Sopranos — the few who survived — went out pretty much the same people as when they started. Nobody learned a thing. As Chase was fond of saying, that’s how life is. Maybe. But it doesn’t make for great fiction. Neither do dopey dream sequences, which Chase employed far too often.

Season Four of The Wire isn’t yet available on Netflix, but I have it in the queue. I’m told shooting has started on Season Five, which will be the last one. Sounds good to me. All stories must end. I’ve never seen an episode when it actually aired, and I think I’ll keep it that way. Viewing two or three episodes at a time on DVD really seems like the best way to do it, at least with this show.