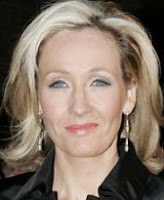 It’s no sign of my blogging prowess that roughly eight out of 10 of my posts concern J.K. Rowling, but here goes another one. The creator of gay icon Dumbledore has finished her first work since closing out the Potter series: The Tales of Beedle the Bard. It’s about the failure of the U.S. intelligence apparatus in the run-up to the Iraq War.

No, really it’s a collection of fairy stories, and the title comes from a book mentioned in Deathly Hallows as a gift from Dumbledore to Hermione. Yes, somebody could have fun with the book description, but it won’t be me.

In case you’re thinking of being first in line at Barnes & Noble, you’ll be waiting a long time. Only seven copies of Beedle the Bard will be in print. It’s ironic that the pinnacle of success puts Rowling on the same level as me, when it comes to readership. Seven turns out to be the same number of people who read my latest short story. Maybe we can do lunch sometime.