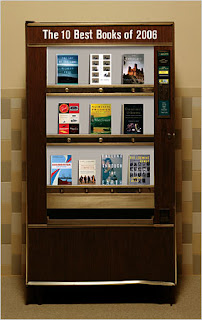 While waiting for a new shipment of books to arrive, and while struggling with the dread of paying the fine that awaits at my local library, I had a look at the New York Times list of “The 10 Best Books of 2006.”

Anyway, without clicking on the link, can you name even one of the best books of 2006, as decreed by the Times? Two? Five? How about who won the 2006 Super Bowl? I didn’t think so. (It was the Pittsburgh Steelers.) Fame is so fleeting.

On the books question, I named one, and it’s no coincidence that it’s the only book on the list that I’ve read: Mayflower, by Nathaniel Philbrick. I mean, it’s no Learning to Sing, Clay Aiken’s autobiography, but it ain’t bad. It ain’t fiction either, and if I keep doing posts like this, I’m going to have to call it Dave’s Bullshit Warehouse.

The only other book on the Times list that I have the slightest interest in is Special Topics in Calamity Physics, by Marisha Pessl. This is because it’s billed as a murder mystery, and I haven’t read many of those lately. Also, the title is irresistible. Can anyone recommend this, before I roll the dice with Amazon? The reviews mention that this Marisha Pessl is also a bit of a hotty, but that has nothing to do with my interest. That would be puerile. And if there’s one thing the Fiction Warehouse is not, it’s puerile.