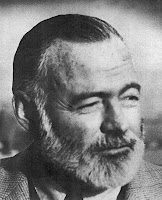 As a younger man I was a great fan of Ernest Hemingway’s early stories — stuff like “The Three Day Blow” and “The Big Two-Hearted River.” And like most young men who think about writing, I shamelessly aped his style in community-college writing classes, cobbling together a bunch of pointless stories that I never got around to finishing. Only later did I hear the old joke about American writers consisting of two groups: Those trying to write like Hemingway, and those trying not to.

I didn’t worship Hemingway’s longer works quite so much. In fact, the only ones I’d read until recently were A Farewell to Arms and The Old Man and the Sea. But with the upcoming Paris trip in mind, I decided to try A Moveable Feast. In case you haven’t read it, it’s a surprisingly sentimental memoir of Hemingway’s life in Paris in the 1920s — the exact time and place he was writing those short stories I used to admire.

I picked it up for its descriptions of Paris, but A Moveable Feast also contains a lot about writing. For all his reputation as a drinker and brawler and all-around bon vivant, Hemingway was quite disciplined about his writing. Often it seemed to come easy to him, but he persisted even when it didn’t. He didn’t spend a lot of time waiting for inspiration:

At this late date, I don’t know if I’d recognize a true sentence if I saw it. But trust Hemingway to reduce the problem to its essentials. There can be no paragraphs, or chapters or books without that first sentence. Probably a good idea to make it as honest as you can.