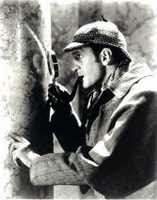 As a reader and part-time writer of crime fiction, I’m familiar enough with most of the rules of the genre — for example, your story had better have a corpse in it. But if you’d pressed me on it, I would have listed maybe five such rules. Turns out there are 20, at least according to this list, first published in 1928 by mystery-writing legend Willard Huntington Wright. (Don’t know WHW? Then you don’t know jack.)

Actually, by today’s standards, just about five of the rules still seem to be in force — including the one about the corpse. Some of the others might be a little dated. No. 11, for example:

“A servant must not be chosen by the author as the culprit. This is begging a noble question. It is a too easy solution. The culprit must be a decidedly worth-while person — one that wouldn’t ordinarily come under suspicion.”

Oooh-kay. No servants. What else should the aspiring mystery writer guard against? Rule No. 20 is a handy guide to keep by the desk:

“I herewith list a few of the devices which no self-respecting detective story writer will now avail himself of. … To use them is a confession of the author’s ineptitude and lack of originality. (a) Determining the identity of the culprit by comparing the butt of a cigarette left at the scene of the crime with the brand smoked by a suspect. (b) The bogus spiritualistic se’ance to frighten the culprit into giving himself away. (c) Forged fingerprints. (d) The dummy-figure alibi. (e) The dog that does not bark and thereby reveals the fact that the intruder is familiar. (f)The final pinning of the crime on a twin, or a relative who looks exactly like the suspected, but innocent, person. (g) The hypodermic syringe and the knockout drops. (h) The commission of the murder in a locked room after the police have actually broken in.” (i) The word association test for guilt. (j) The cipher, or code letter, which is eventually unraveled by the sleuth.”

Hey, is this a list of no-no’s, or really great ideas? I’ve never even heard of “the dummy-figure alibi.” Although I will own up to considering a few of the other devices listed above, at some point or other. So that’s why those stories didn’t sell…