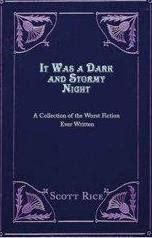 This year’s winning entry in the 2007 Bulwer-Lytton Fiction Contest is a sobering reminder on the perils of handling dashes and subordinate clauses without parental supervision. It’s also quite funny:

“Gerald began — but was interrupted by a piercing whistle which cost him ten percent of his hearing permanently, as it did everyone else in a ten-mile radius of the eruption, not that it mattered much because for them “permanently” meant the next ten minutes or so until buried by searing lava or suffocated by choking ash — to pee.” — Jim Gleeson, Madison, Wis.

Personally, I thought the runner-up entry worked even better:

“The Barents sea heaved and churned like a tortured animal in pain, the howling wind tearing packets of icy green water from the shuddering crests of the waves, atomizing it into mist that was again laid flat by the growing fury of the storm as Kevin Tucker switched off the bedside light in his Tuba City, Arizona, single-wide trailer and by the time the phone woke him at 7:38, had pretty much blown itself out with no damage.” — Scott Palmer, Klamath Falls, Ore.

“I’d been tailing this guy for over an hour while he tried every trick in the book to lose me: going down side streets, doubling back, suddenly veering into shop doorways, jumping out again, crossing the street, looking for somewhere to make the drop, and I was going to be there when he did it because his disguise as a postman didn’t have me fooled for a minute.” — Bob Millar, Hässelby, Sweden