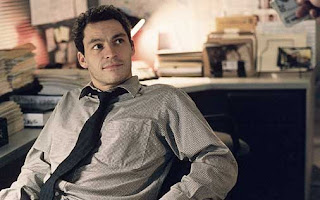 We don’t watch a lot of TV here at the ancestral manse, and now that “The Sopranos” is history, we watch even less. My current viewing schedule is about the same as it was a decade ago: Reruns of “Seinfeld,” mostly, and the odd episode of “American Justice.”

But whenever the wife and I rave about “The Sopranos,” certain friends and relatives keep insisting that the HBO series “The Wire” is not only just as good, but better. Recently we went off to Blockbuster to test the truth of that assertion.

The verdict, after viewing the first two episodes: It ain’t bad, but it ain’t “The Sopranos.” What made Tony and the crew so appealing was the constant tension between Tony’s role as a modern suburban family man and his role as boss in the volatile and amoral mob. That tension allowed a lot of incisive, surprising and frequently humorous commentary on American life. “The Wire” does deliver some sharp writing, but (on the evidence of two episodes) at its heart is still a fairly conventional cop show. Right down to the apoplectic chief hectoring his idealistic rogue detective.

I’m told it gets better, and I’ll keep an open mind. For now, I’m still convinced that TV writing doesn’t get any better than on “The Sopranos.”