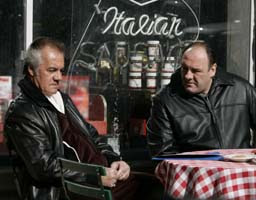 … I’m still not sure if I like David Chase’s jerk-out-the-plug ending of The Sopranos. Yes, I was one of the thousands who thought my cable had cut out at the worst possible moment. But before I was able to start cursing the hardware, the credits began to roll. Huh? Was that it?

Guess so. The best television series ever made died as it lived: on the fine line between Chase’s genius and his penchant for self indulgence.

In art, ambiguity is often mistaken for genius. And that about sums up my view of this final episode. My wife thought it was brilliant. I didn’t. Not that I’m bitter. Even at its worst, The Sopranos was far better than anything else on TV, and that includes episode 6-21, “Made in America.” But as the creator of these memorable characters, do you really want to leave your audience slapping the cable box and fiddling with the remote at the very last scene?

Since we are forced to impose our own meanings on the Rorschach blot Chase left us, here’s mine: The black and silent screen symbolizes, if not Tony’s literal death by a bullet to the head, the moral death he has wrought for himself and his family in the moral wilderness of North Jersey. Individually, each member of the family dabbled in ethical behavior, and one by one, each took the lower road. Tony’s spiritual epiphany after his coma soon subsided to the press of mob concerns; Carmela’s unease with “blood money” and the disappearance of Adriana dissolved as she focused on dishonest real estate deals; Meadow, champion of minorities, finds her own minority most deserving of her talents (seeing as how she could start at $170,000 a year); A.J.’s vague yearning for meaning gives way to the charms of a model girlfriend and a new BMW.

Bottom line: However you feel about the abrupt ending, at least we should agree it was not a happy one.